MAIN NEEDS FOR TRAINING: To deliver all the subjects in the same training course

HOW TO DO IT:  Summer School or Erasmus International Training Course

MAIN NEEDS FOR TRAINING: Know how to define and/or apply procedures in their own organization 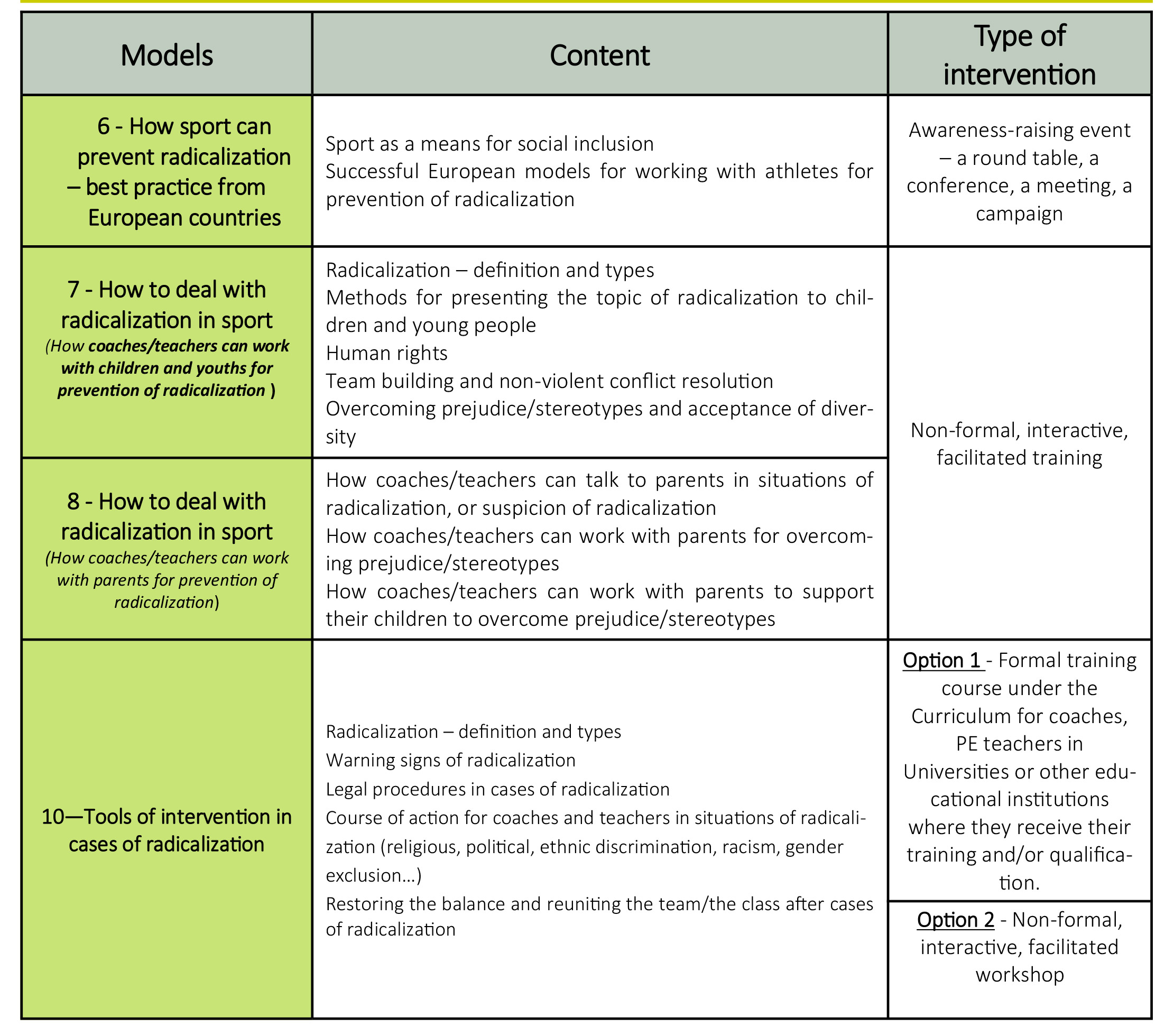 MAIN NEEDS FOR TRAINING: Learn how to deal with the community outside the organization 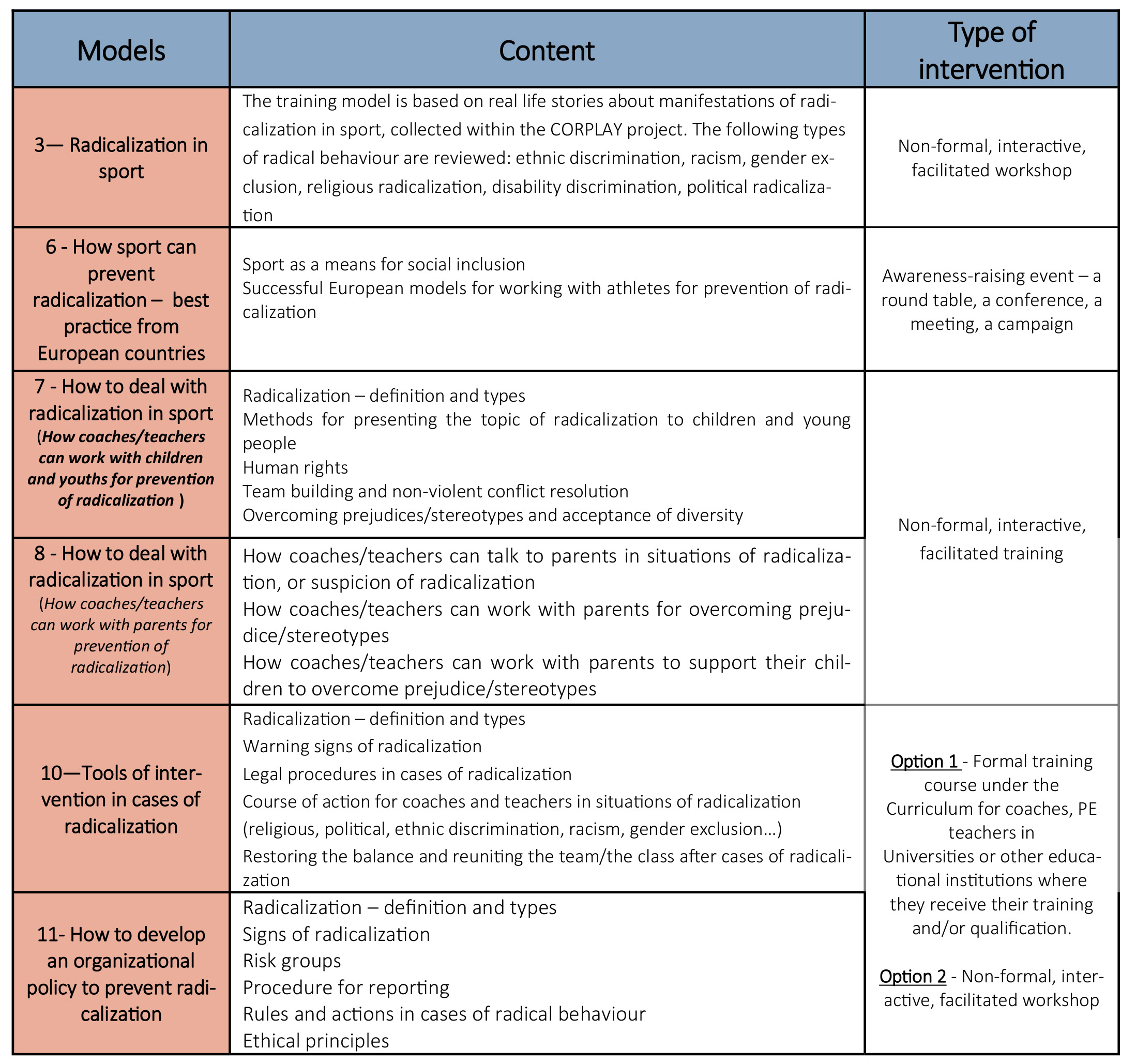 MAIN NEEDS FOR TRAINING: Adopt a Policy in their sports organization 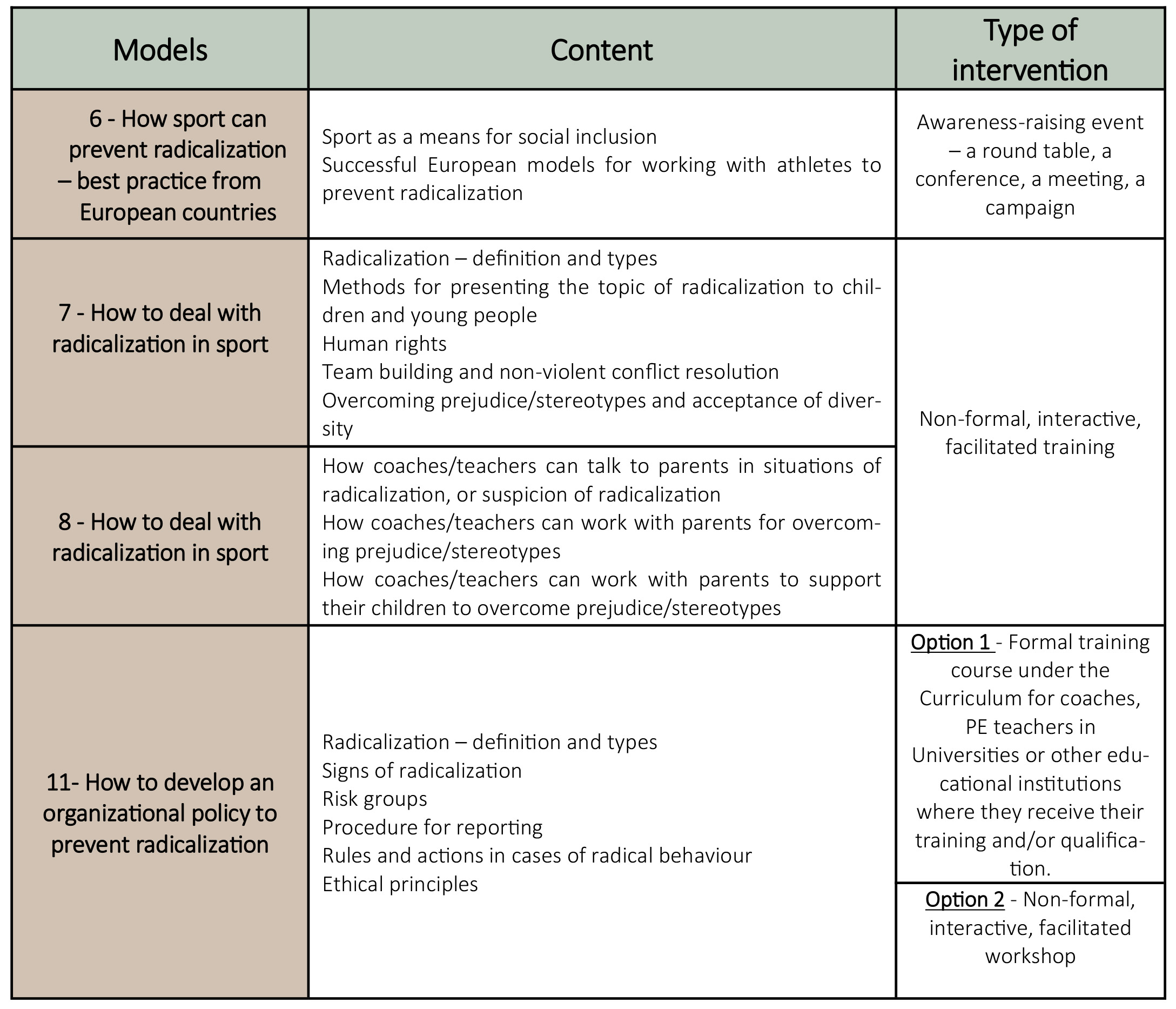 MAIN NEEDS FOR TRAINING: Introduction on the main topics, based on their own day to day life experiences 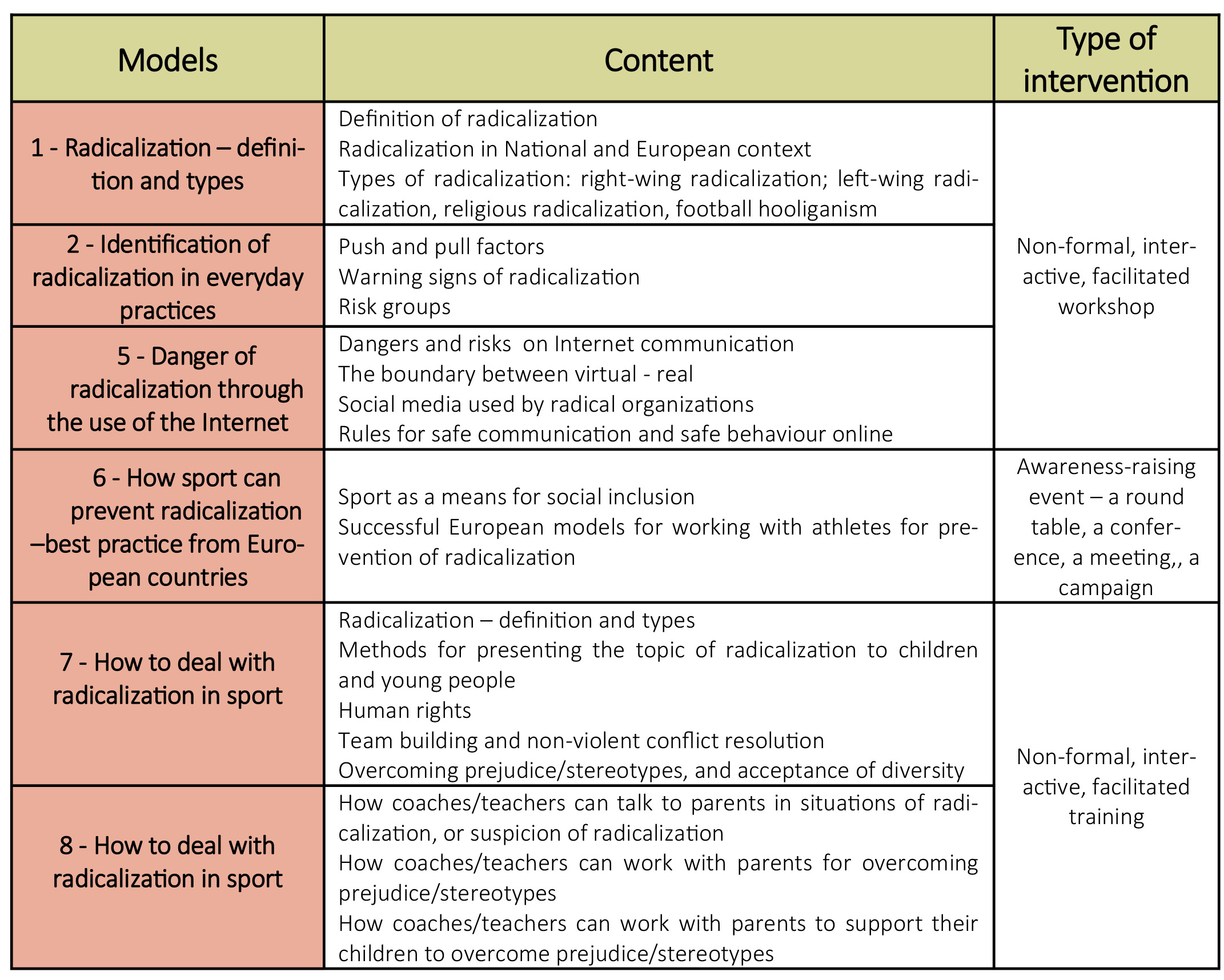 Evidence provided by the CORPLAY stories, indicates that the effects of racism and exclusion can be found at grassroots level sports organizations, both at professional and at amateur level, and that a lack of awareness is observed about the impact that intolerance can have in young people.

The CORPLAY stories have detected a strong demand for training/ learning, considering that most (82%) of the coaches, referees, sport managers, physical education teachers and grassroots sport organizations have reported that they lack the necessary skills and competences to understand and detect signs and indicators of radicalization, and appropriately deal with radicalization processes and cases.

Furthermore, the Stories have detected training demands also in the case of athletes and some parents, who have reported feeling alone and unskilled to actively intervene when facing troubling situations.

Sport organizations are used as a “reservoir” for actions to proselytize led by radical nationalist or religious organizations.

People who have suffered marginalization (or feel they have been discriminated) abandon the team, join radical informal groups, also a-political or a-religious, or use sport to express extreme aggressiveness;

Coaches and managers that impose a highly authoritarian sport ethos, asking for extreme forms of submissiveness to athletes.

In changing rooms or during matches some people are systematically labelled and excluded because of their national, religious or social belonging.

“I definitely have not got enough skills to deal with such situations. So far I have not been trained on this topic and I have reacted by intuition. I’m not sure if this is the right way, and I think the result is temporary, limited to the specific case. All colleagues have been involved in the case, but they also do not feel confident about this”

“I felt and I feel that I lack the skills and knowledge necessary to manage that kind of situation. The most difficult part was when I had to speak with her mother as I did not know what I would be dealing with”

Coaches in sport clubs, associations and federations and physical education teachers are the people in direct contact with those most at risk of radicalization and they are able to detect, from their privileged stand- point, symptoms of uneasiness, situations of discrimination and isolation and violence that could be invisible to other adults, parents included.

Some of the formal training could be included in the curriculum of the educational institutions and organizations training coaches and physical education teachers. 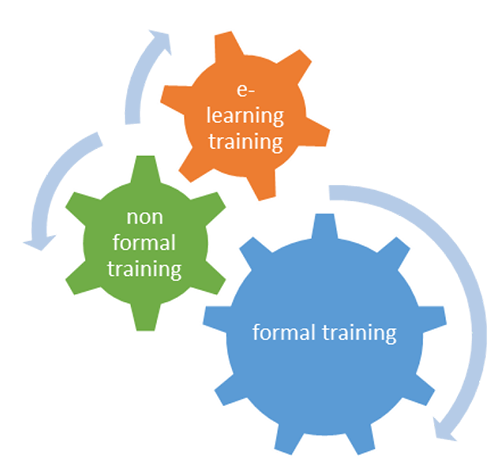 Different learning models have been developed according to the training subjects. These models are designed to provide knowledge and develop skills to detect radicalization processes in sport environments and take suitable measures.

Learning models can be used separately or can be combined taking into ac- count the context and the specific needs of the trainees. 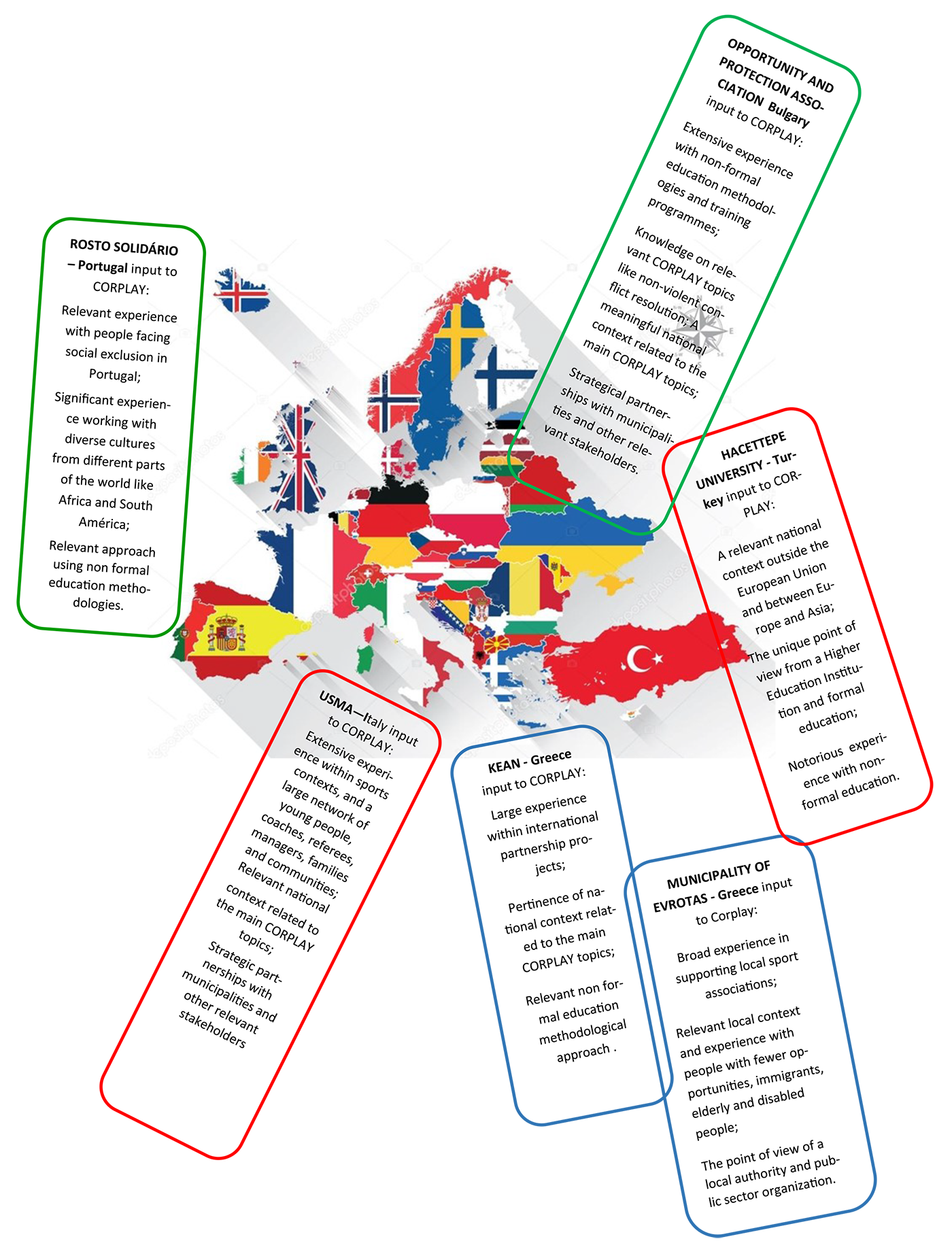 CORPLAY’s mission is to enhance the role of sport in preventing youth radicalization and will be accomplished by promoting and providing specific training for coaches,
sports organizations and physical education teachers to improve their knowledge and ability to deal with youth at risk of radicalization.

CORPLAY is an international partnership involving partners from five countries with different backgrounds and from different sectors. 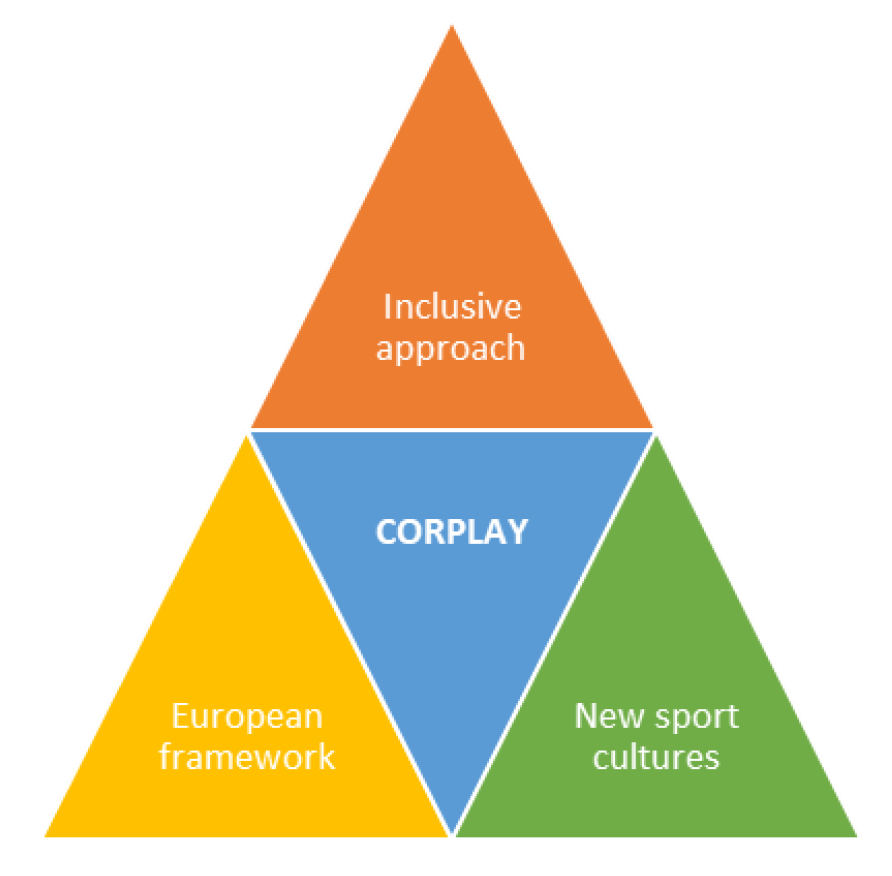 The CORPLAY methodology is based in a bottom-up approach involving grassroots sport organizations, giving importance to locally generated knowledge and experience.

Inclusive approach that could possibly allow to de-radicalize young people, rather than exclude them from sport organizations;
European framework, taking into account the difference between countries and social con- texts and circumstances;

Radicalization is a social and psychological process of increasing commitment to extremist political or religious ideology, and adolescence is typically a period of maturation in which young people experiment with their identity, group relationships, political ideologies and their place in the world.

Evidence provided by the CORPLAY stories indicates that the effects of racism and exclusion can be found at grassroots level sports organizations, both at professional and at amateur level, and that there is a lack of awareness on the impact that intolerance can have in young people.

Considering the relevance of sport in western society, and the amount of people freely involved in sports activities, it is reasonable to assume that grassroot level organizations have a relevant social responsibility within society.

In the particular case of sport we can observe the same phenomena that characterizes the broader society, such as political, religious, gender, homophobic or other forms of social and cultural violent radicalization.

In order to make sport organizations privileged places to promote de- radicalization, social cohesion and inclusion, it is important to provide managers and coaches, and possibly also parents and young people involved in their sports activities, up-to-date tools to detect and counteract cases of violent radicalization.

Sport organizations informally accept their members based on their political, religious or sexual orientation.

Friendships and informal networks, in a team, are formed following rigid criteria based on nationality, ethnicity or religion, informally although systematically excluding minorities. 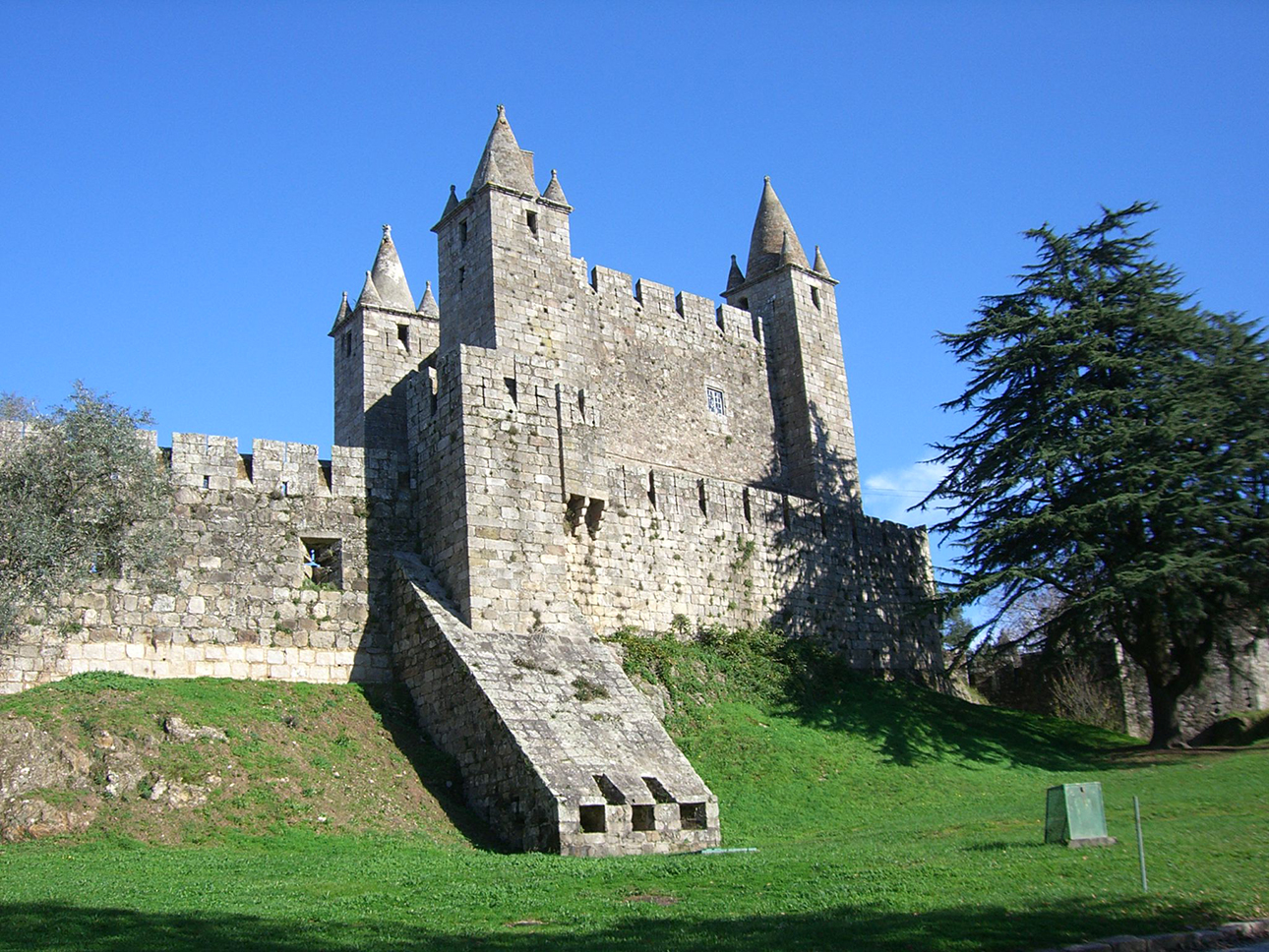 This meeting was organized and hosted by Rosto Solidario. During the meeting were presented the ME2 and ME3 Multiplier Events; the output O5 – Learning courses models; the debate on the O6 – Open educational resources; presentation of the draft of the O7 – Sport based counter narrative guidelines.

The following steps were decided to continue the project in view of the final meeting. 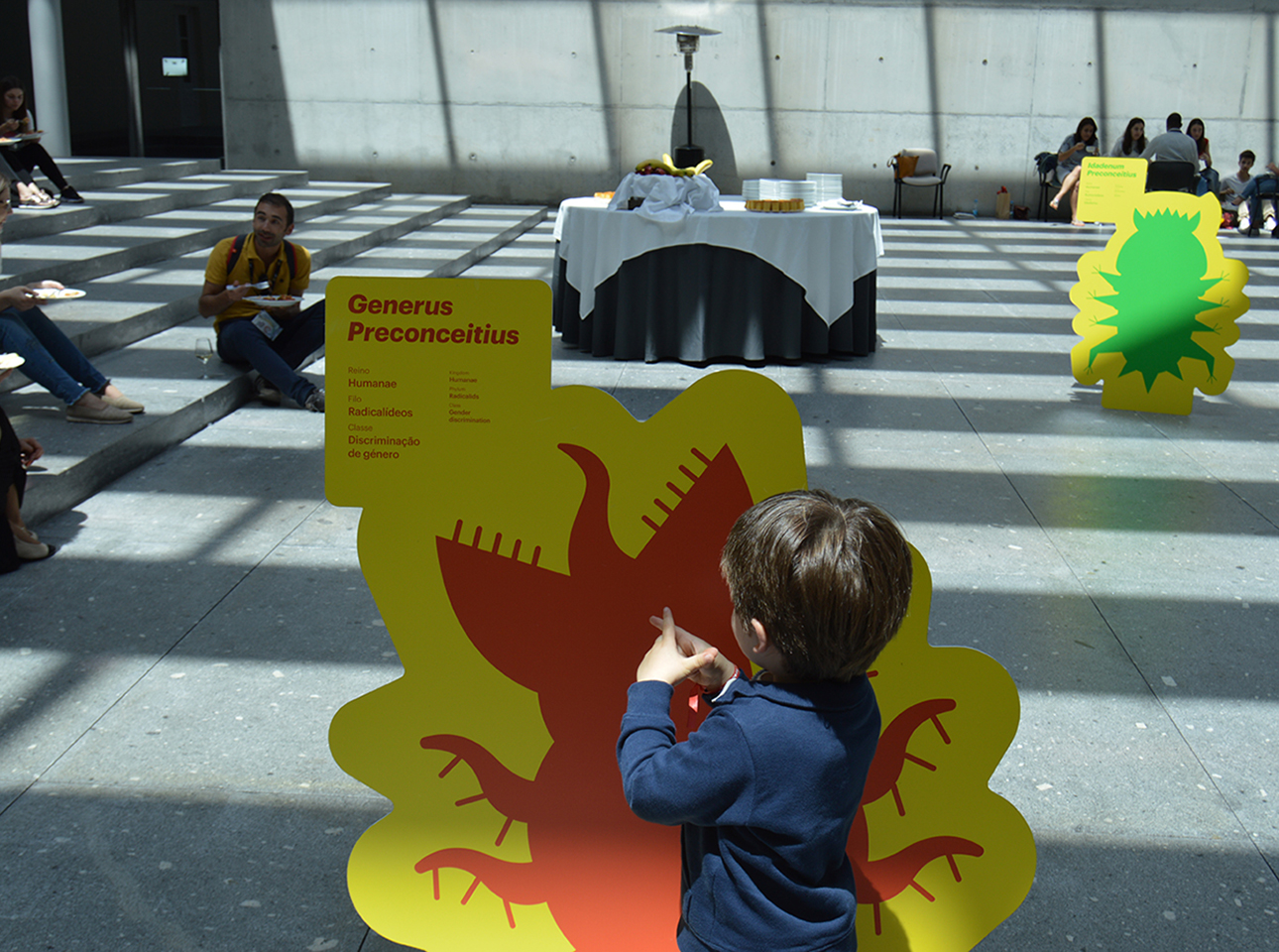 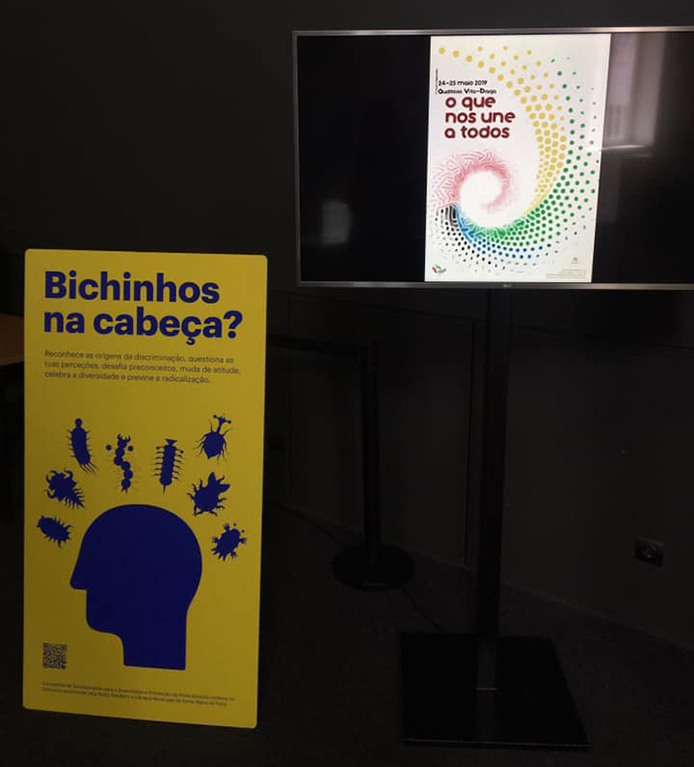 On the 24th and 25th of May 2019, CORPLAY campaign “What’s bugging you” travelled to Braga, to attend the II Fórum Missionário da Arquidiocese de Braga: O que nos Une a Todos. About one hundred and fifty people met the bugs while attending the workshops and roundtables at the event.

Feedback from participants – youth workers, education specialists, project managers, volunteers, local community, etc.-  acknowledges that prejudice can in fact trigger discrimination and can be an obstacle to the fulfilment of Human Right for every person, wherever she or he lives!

The Fórum Missionário is an annual event led by Centro Missionário Arquidiocesano (CMAB) to allow knowledge and experience sharing among local and national stakeholders and foster critical thinking and activism to end inequality. 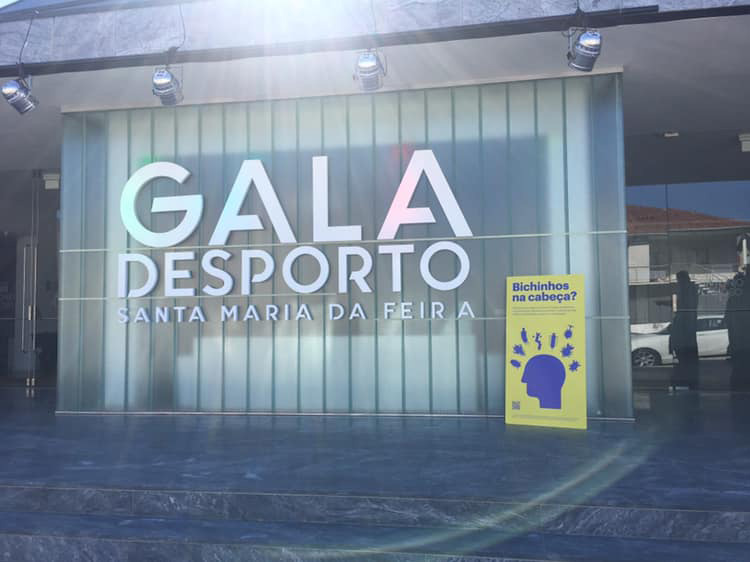 The event took place during the Annual Sports Gala [see CORPLAY Campaign presentation at 1’01’’] in a close partnership with the Municipality. The Gala gathers together the key local, regional and national sports and education stakeholders and authorities to acknowledge the achievements within different types of sports throughout 2018.

The campaign is based on the findings of the analysis of Stories of Radicalization and Counter-Radicalization collected in Bulgaria, Italy, Greece and Portugal in the end of 2018.